On the homepage of nxing wiki, there used to be one sentence which really impressed my very much when I first time to take a look at it and learn it three years ago:

Apache is like Microsoft Word, it has a million options but you only need six. Nginx does those six things, and it does five of them 50 times faster than Apache.  --Chris Lea

Now it is not there anymore, how you can still search on the web to see it: example link.

One of the six things nginx can do and can do gorgeous is putting it in front of the web application server as a Cache Reverse Proxy, which does two major tasks:

What are the benefits of doing this? There are many, items below are copied from Wikepedia:

This post is focused on No 1 and 2 with dynamica content from backend web server, No 3 is simple enough, nginx provides a HTTP UPSTREAM module for doing it.

Image there is a web resource which is frequenyly accessed, and is less frequently updated, but it does cares about

For this kind of scenario, our idea scenario is:

Nginx can cache the resource, and it will refresh the cache as soon as the resource got updated, so that all the further requests will retrieve the latest version!

How to do it

I built up a Rails 3, it expose a resource: http://localhost:3000/doc, it is very simple, each time a GET request comes in, it read a JSON file stored on hard disk:

And each time a POST request comes in, it update the Counter to plus one.

The view and edit actions in controller:

The simple view which renders JSON :

The rails server is bound to port 3000, and I am now going to config my nginx, my nginx.config is located at /usr/local/etc/nginx/nginx.conf:

The explanation is below:

Now if I restart my nginx server: sudo nginx -s reload, and visit http://localhost/doc, I can see the JSON with Counter equals to 1 rendered on the web page:

And if we cd into /var/www/cache, we can see nginx has cached the request: 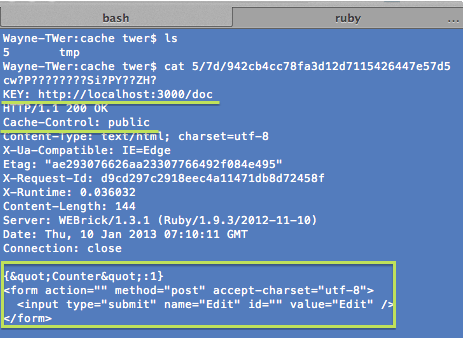 Important notice here: nginx will honor HTTP Cache-Control header, i.e. if its value is set to "no-cache" or "private", nginx will NOT cache the response!

Now I am going to update the Counter:

And when I visit http://localhost/doc again, no doubt, I will see Counter is "1" since I've let nginx to cache it.

Important notice here: after nginx cache the resource inbound with an HTTP verb, any further request with the same HTTP verb on this resource will be responded by nginx, backend server will never got hit!

Now comes to the key point, by default nginx will pass any HTTP POST request to the backend without looking up the cache, so I can "purge" the nginx cache for specific resource, so that next time when a new request comes in, nginx will rebuild the cache!

The tool for purging nginx cache is a CLI tool called nginx-cache-purge.

So that I can add a invoking line in my "edit" action inside my doc controller:


Now every time we edit the Counter by HTTP POST, the Rails app will invoke CLI to purge the "/doc" cache, so that next request will lead nginx to re-cache it, we are all set!

Actually nginx provide a standard HTTP API to purge the cache, that is proxy_cache_bypass module, it allows website administrators to define customized interface to bypass nginx cache look up, in my nginx.conf above there are two lines:

So if any client fires a HTTP request that contains header Secret-Header: 1, nginx will bypass the request regardless of whether the requested resource was cached or not.

nginx is really a powerful and fast web server, and it is easy to use and config as well! Using nginx as a Cache Reverse Proxy can dramatically improve your website's loading speed and concurrency performance, thus improves UX and lower down the server cost. That's why it is used by so many popular websites.

You may also enjoy

BMW Convertible As My Beater Car

Life is too short to drive boring cars I bought a 2015 BMW X5 Dec last year, it has been half a year so far (with 2 months she stayed inside the garage for most of the time due to the pandemic), I am pretty satisfied with it, her condition is absolutely excellent, everything works, yes you see it correctly, after 5 years of its life, there was nothing broken, as BMW vehicle built in recent years, this is something not VERY easy. My plan is to keep it as long as possible before it turns into an endless money pit, and keeping her value as high as possible, one of the major reason I b...

Instead of spending any cent in the money pit casinos, I’d chose to do something more meaningful and exciting :) SkyJump Las Vegas SkyJump Las Vegas holds the Guinness World Record for highest commercial decelerator descent with an official height of 829 ft (253 m) and is located at Stratosphere Las Vegas. As part of its grand opening event, Las Vegas Mayor Oscar Goodman presented a written proclamation deeming April 20, 2010 as SkyJump Day in Las Vegas. – Wikipedia (https://en.wikipedia.org/wiki/SkyJump_Las_Vegas)

This is my second time attending AWS re-Invent, last time was year 2017, the purpose of this blog is to summarize what I’ve learned, impressed and entertained

At reinvent logo Crazy crowd at midnight madness party Overall during my week staying my daily schedule was listening to sessions mixed with slack/emails during the daylight, and party/social in the evening time. All the keynotes/sessions have been uploaded here: https://reinvent.awsevents.com/learn/keynotes/ and all announcements were summarized at this page, my personal top 5 thrilled announcement...

WHEN YOU ARE OLD When you are old and grey and full of sleep, And nodding by the fire, take down this book, And slowly read, and dream of the soft look Your eyes had once, and of their shadows deep; How many loved your moments of glad grace, And loved your beauty with love false or true, But one man loved the pilgrim soul in you, And loved the sorrows of your changing face; And bending down beside the glowing bars, Murmur, a little sadly, how Love fled And paced upon the mountains overhead And hid his face amid a crowd of stars. – By William Butler Yeats 当你年老时     ...